No… I didn’t forget the ‘E’ at the end of ‘Improv.’ What if instead of IMPROVE-ing your life… you IMPROV your life?

April 2015 – Every two weeks I do 3 hours of improv acting with my fellow actors at our Talent Agency, just to keep our skills up. It’s ALWAYS kind of scary, it’s exhilarating, it’s funny, it’s intense, and definitely challenging…

This morning I learned about two improv actors in Chicago named David Pasquesi and TJ Jagodowski who take improv a step further – it’s MORE scary and MORE challenging, and from how they describe it, it sounds even MORE enlivening. What makes it so special, from my point of view, is how it’s serves as a metaphor for a way of living.

Here’s how their improv is different:

Every week David and TJ perform their improv show in front of a large audience. If you’ve ever been to an improv performance, they usually ask the audience to yell out WHO they are, WHERE they are, and a basic idea of the scenario they’ll be acting out.

Knowing just that little bit is intimidating enough. But these guys don’t even know THAT much. They don’t ask for suggestions. The lights in the theater go completely black… and when they come back up, the two actors are onstage… just looking at each other. They don’t know who they’re supposed to be; where they are; even if they’re in an interior or exterior setting; they don’t know their relationship to each other or what the scene is that they’re supposed to act out.

They just stare at each other… and wait. At some point, a line of dialogue will come to one of them, and they’ll say it: “You’ll bounce back, man.” The other person will react to it… And ever so slowly, the story that they’re embodying, starts to unfold.

This is not a quick 5 minute scene. It lasts nearly an hour. And they end up playing a ton of different characters involved in the scenario that emerges.

An interviewer asked one of the actors, “That sounds absolutely terrifying! To go onstage and not have ANY CLUE what you’re supposed to do or be… I mean… Aren’t you ever worried that NOTHING will come to you and you’ll just completely flop in front of a huge audience?”

TJ says, “OF COURSE! Before the show goes on it’s an absolute maelstrom going on inside of me!” 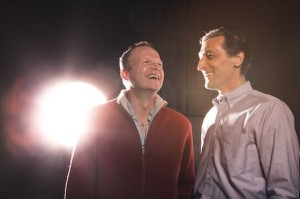 But what makes it doable and less anxiety-producing to them is… They tell themselves a little story:

When the lights go dim at the beginning of the show, the stage is literally SWIRLING with billions of characters and scenarios. And when the lights come up, one of those scenarios freezes into place, right there onstage. And all David and TJ have to do is simply STEP INTO the characters and live out what’s going on in their lives.

They imagine that these characters actually EXIST somehow, somewhere – and that they’re just kind of ‘borrowing’ their reality for that hour. After the show, these characters will continue on with their lives – in their marriages and in their jobs, and they’ll even eventually die, as we all do.

So the stress of ‘coming up’ with a brilliant scenario and dialogue is lessened because… It really isn’t UP to them anymore; they just step into a reality that already exists. The KEY, they said, is: “To just listen and pay attention… and respond honestly in each tiny moment.”

I listened to this and felt… a little stunned. I mean, WHAT IF that’s the case with us, in some strange sense? WHAT IF our lives are already existing in some reality and we are just ‘stepping into’ them and living them out AS IF we have some big ability to control anything?

Sure, we have CHOICES – which is what these actors have: Moment by moment CHOICES of what to do or say next. Other than that, they have NO IDEA what’s going to happen. And really… we don’t either.

After I heard this interview, I realized I was late for a meeting. I started up my usual rushing around and my usual Mind Loop of: “Oh God Barbara, here you are once again: LATE.” I worried about getting stuck behind a slow driver… I fretted about whether I should take the time to text her or just go.

And then, I thought: “Wait a minute! What if this scene is already ‘written’ – and I’m just ‘stepping into’ it this morning? Either I’m going to be late… or I’m not. Whether I stress out about it, get down on myself for leaving the house late, get irritated with a slow driver (or not) – it doesn’t matter. I’m either going to get to my meeting on time – or I’m going to be late.

So… I relaxed. COMPLETELY. I ended up behind a slow truck for part of the drive, and even that didn’t disrupt my calm. It was just the ‘scene’ playing itself out. And guess what? When I arrived in the parking lot, I saw the person I was meeting getting out of her car. I was literally 30 seconds late – which was basically impossible, but hey: That’s how the scene was written.

Maybe you’ve heard the phrase: “One Day At a Time.” That is a beautiful, wonderful statement to remind ourselves whenever life gets overwhelming. But from the angle of IMPROV-ing your life, it’s even easier than that: It’s “One MOMENT At a Time.” Because when you think about it, that’s all we ever really have anyway: The Moment.

Yes, I still believe it’s VITALLY important to get clear on my goals and desires, and set intentions for those. But at the same time… it’s about letting them go. Because, let’s face it: I don’t have any REAL control over whether or not all those goals and desires come true. So I set the intention… And then take control where I actually HAVE control: In each little moment, where I have a CHOICE: Over what I want to say, how I choose to react (or better yet, RESPOND), and what I choose to do.

Your Challenge This Week:

Decide what you would LIKE to have happen in your day or week (or further into the future), and put that out there AS AN INTENTION.

Then… STEP INTO your life, like TJ and David stepped into their characters, and just LIVE, moment by moment, this week.

See if you can let worries go too. Because – using improv acting as our analogy – if you’re trying to think of what line you’re going to say next during improv (thinking too far ahead), you lose out on the nuances of the moment and start to get stilted and stumble. And when we worry, we’re thinking WAY too far ahead into areas we truly have no control over, and our lives too, become stilted and we stumble.

IMPROV your life this week. See what comes up. I’d love to hear what happens. It may turn out to become one of the best scenes you’ve played yet.

Wishing you a wonderfully spontaneous week!

6 thoughts on “IMPROV Your Life”