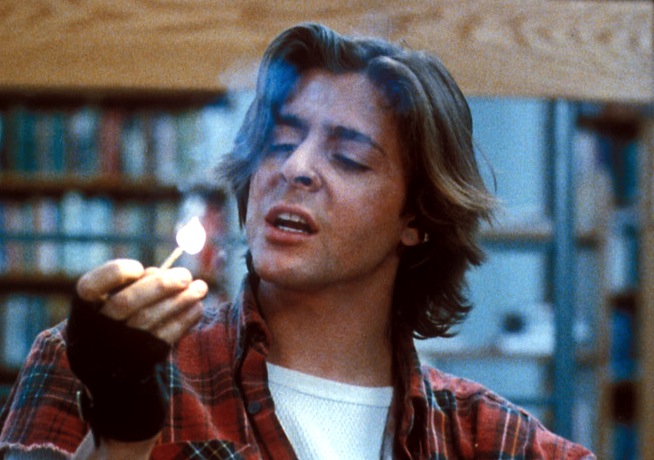 I Love Your Nostrils

Sept, 2015 – When I was studying filmmaking at New York University, I worked incredibly hard during the week. By the time Friday rolled around, I was ready to blow off some steam! My favorite method was to go out to a nightclub until 2am… and then go to an AFTER-HOURS club until 4, 5, 6am… You get the picture.

One night my friends and I went to this after-hours club in the Village where you walk down a flight of stark white stairs and knock on an unmarked door. A tiny slot opened and two big, dark eyes checked us out, asked a question or two… And then the door opened.

There was a cool scene going on in there. We went in and looked around… And there, alone in the corner, I saw the guy from that movie, “The Breakfast Club” – Judd Nelson. You know, the tough kid, kind of hot looking in a bad boy way – at least to me.

In fact… I always loved his nostrils.

So of course I had to ask him to dance! Those nostrils were CALLING to me! So I did just that. Judd Nelson said, “Sure,” and next thing you knew, I was dancing with the guy from “The Breakfast Club.”

Things were going well: He smiled at me… I smiled at him… He smiled a little more jauntily at me… And then I said, “I love your nostrils.”

His eyes got huge and his mouth dropped. He stopped dancing and stared at me. Then he looked down at the ground, and walked away. I tried to get his attention later, smiling at him from across the bar… But my time with Judd was over. Later I saw him dancing by himself, facing a wall.

I shrugged it off at the time, but recently a friend suggested watching that movie again with me, so the memory came back and I started thinking more about it.

I’ll never know what was actually going through Judd’s head at the time, but here is at least a guess:

Maybe Judd hates those nostrils of his. They ARE rather… well… ‘BOLD’ looking, after all. Unusually so. And we all know what happens whenever there’s something unusually ‘bold’ about a person’s appearance: They don’t totally ‘fit in’ with how everybody else looks. Which means he probably got a bunch of crap for that exact feature at some point in his life. And probably more than just once. Maybe Judd thought I was just another fruit loop chick giving him more crap about his nose. Which wasn’t the case at all – but how would he know that? After all, who the hell ever gives people compliments about their nostrils for God’s sake? (um… me?)

Anyway, that got me thinking today about how every one of us probably has AT LEAST one feature of our bodies or appearance that we dislike; something people teased us about when we were kids or that doesn’t look ‘right’ or ‘perfect’ – at least to us.

The odd thing is, that very feature we hate can be exactly the thing that people find interesting, attractive, even hot. You know how spaces between front teeth can look really sexy? Or bald heads? Or elfin-shaped ears? (sexy to Hobbit fans anyway).

The point is, we all have body issues to some degree or another. And yet our bodies are AWESOME – warts, bold nostrils, and all. So how can we get to the point where we actually LOVE our bodies – every single inch of us? Here’s one way you can start:

Your Challenge This Week:

Every night this week just before you go to sleep, ponder this quote from Stanford biologist and best-selling author, Bruce Lipton:

“When you look at yourself, you see an individual person. But if you understand the nature of who you are, you realize that you are actually a community of about 50 trillion living cells. Each cell is a living individual, a sentient being that has its own life and interacts with other cells in the nature of a community.”

Each cell is a sentient being! Like a sweet little creature inside of your body – in fact MAKING your body!

Not only that, but each and every one of your cells digests food, breathes, goes poop, has ‘sex,’ and has a nervous system, immune system, and musculoskeletal system. Lipton puts it this way: “We are in fact, made in the image of a cell.”

Wow. Those cells sound pretty spectacular to me

And just IMAGINE how many gazillion tasks all those beautiful little creatures are doing for you, day in and day out, 24/7, without so much as a thank you from their Community Leader, ie, YOU?

They help you breathe, and taste yummy hot french fries and digest juicy peaches and process the nutrients from them and release the rest; they allow you to see double rainbows and pet your cute freakin’ dog, and blink out dust and move your arm so you can scratch that itch behind your ear; they do all the complex processes involved with each of your awesome organs… Not to mention allow you to walk to your car so you can sit down in it and go off on a road trip. Your wonderful cells even help alert you to the fact that Judd Nelson’s bold nostrils get you hot and bothered. How cool is that?!

Your body – every little inch of it – is GLORIOUS. It’s full of delightful little creatures who do so incredibly much for you.

So when you’re going to sleep, shift your focus away from what you DON’T like about your body… and instead, think about all those beautiful, little sentient beings that make up your body… and send them some love. They deserve it. YOU deserve it. And Judd Nelson’s nostrils deserve love too.

Hate your nostrils? Or that extra weight on your belly or hips that is starting to feel more like the sticky stuff on the backs of cheap tags because no matter what you do IT WON’T COME OFF?! Or any other body issue – including “I’m not ______ enough” (ie, not beautiful, handsome, smart, sexy, thin, young, ETC enough)?

If those Mind Loop thoughts go through your head every time you look in the mirror, contact me for info on Mind Loop Mentoring sessions. They’re fun, fascinating, and TRANSFORMATIVE. I’ve got your back. Even the hairy ones.

You ARE good enough. In fact, you’re freakin’ AWESOME! And you’ll FEEL it once I’m done with you! 😉

3 thoughts on “I Love Your Nostrils”